District Education Officer (Primary) Rohini Kumbhar, who is also in charge of Zilla Parishad Schools, He added, “At this stage, the government has only asked us to collect information and report it. Although at this time I do not have the exact figures available at all, we have about 500 schools that fall in this category.

Nagpur district also has about 1,500 Zilla Parishad schools and low enrollment has been a problem in almost every district for a long time.

A senior academic working with a Zilla Parishad school said, “In today’s time, parents want English medium education for their children, and because of this our Marathi medium schools do not like them very much. You also have to understand that the world has changed a lot with mobile, satellite TV, and the internet reaching almost every village in semi-urban areas. With parents seeing the world in metro cities and abroad, it’s no surprise that they want their kids to have it all.”

Zilla Parishad schools are facing the challenge of retaining their students

“Parents also have a belief that an English-medium education will open those doors for their children,” They said.

Milind Wankhede, principal of a Marathi medium school in Kampti tehsil, said, “Marathi schools will have to immediately shift to semi-English mode and from there to English. That’s the only way to survive.” He cited the example of his own school where innovative steps were to be taken. “I changed my primary level to semi-English first and then continued with that current batch to ensure enrollment doesn’t drop,” Milind Wankhede said.

“The big question is, are our teachers equipped to teach in English. This is also a government setup, because of this you cannot hire teachers at all of your own will and it is completely impossible to force anyone to do anything. Many years ago, we started training our teachers in English through master-trainer pyramid-style workshops, but sometimes the effect was not visible to us at all.” the officer said. 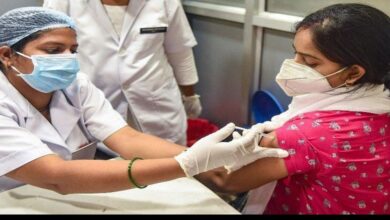