Wardha: The district social welfare department on Friday set up a committee to look into the complaint filed by a student alleging that the Shankar Prasad Agnihotri College of Engineering had grabbed a scholarship in his name with forged documents. Prasad Kulkarni, the assistant commissioner of the social welfare department, who is heading the committee, told TOI that the committee has immediately started its probe.

Sangharatna Ramteke of Mhasla village near Wardha town also claimed that he had never studied at Agnihotri College at all.

In the year 2022, he completed his D.Pharma from Babasaheb Gharfalkar College of Pharmacy, Pulgaon.

This committee also includes one Accounts Officer, two Inspectors, and two Clerks. Kulkarni also said, “We are probing how the student’s documents were used for a scholarship when he claimed that he had not studied Master of Computer Application at all in the Shankar Prasad Agnihotri College of Engineering.”

The Agnihotri group is politically and financially strong

Kulkarni has also told that according to the complaint of the student, when he is not even a graduate at all, then he was enrolled for a postgraduate degree. “This is also a very serious matter and the higher education department should look into it. We are also probing whether other similar scams have taken place. We are going to investigate the matter in a week and if necessary, we are going to take very strict action.” Kulkarni said.

In a press conference held here on Friday, Ramteke also alleged that instead of acting on his complaint, Ramnagar police officials tried to find out “why he was bringing the college into disrepute”. He also accused the police department of shielding the college.

The student activists accompanying Ramteke also demanded a fair and impartial inquiry by a retired High Court judge. “The Agnihotri group is politically and financially strong, so there is absolutely no hope from the local police and authorities,” They said.

“Ramteke further said that a protest rally will also be taken out from Chhatrapati Shivaji Maharaj Square to Babasaheb Ambedkar Square on the date of 4th December. There will be a protest in the winter session of Vidhansabha in Nagpur” They said. 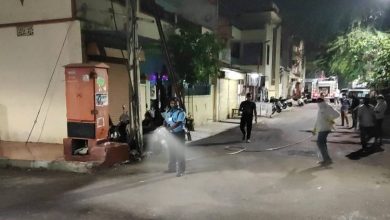