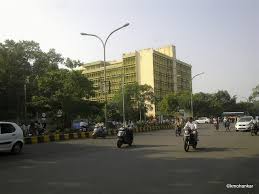 As the rains continued the New Year, we see people still having fun on this big day celebrating the advent of yet another year in their life. The celebrations have started 31st December Midnight, however, those who partied hard in the city had to face the trouble as they were seen on this big day in the court premises. They were waiting outside the court in Civil Lines only to collect their vehicles outside Motor Vehicle Courts.

The reasons were obvious, these were the people who were caught at midnight in the drunk and drive case. This is perhaps the first time when we have seen the local law and order acting tough against the people who violated the traffic rules on the eve of New Year in City. Earlier such offense was only registered against the minors who were seen on the roads and violating the rules.

Earlier before the celebrations started, the City Police have warned the people to have a safe and sound celebration in Nagpur or else they would be punished for the same. More than 4000 policemen were found on duty who were seen in the city in more than 120 camps in Nagpur in different areas taking a vigil against people who violate their rules. The traffic police were seen with the required instrument to check the people who were drunk and seen driving on the roads. Stay tuned to know more about it and others only with us. Meanwhile, if you have anything to comment, do let us know by commenting below.