A 17-year-old girl in Nagpur recently filed a complaint against a mobile shop owner. The case was filed for exploitation and luring for a marriage proposal. The case has been registered against Deepak Barange, a 30-year-old Mobile shop owner by Nandanvan Police under various sections of Indian Penal Code (IPC) and Protection of Children from Offences (POCSO) Act.

The plot begin in February when the survivor who is a class 12 student went to the shop to buy a mobile phone from the shop on easy monthly installments which resulted into regular meetings. Soon they turned into friends and shared mobile numbers. Social chatting brought them to everyday interaction. It was not so far when the friendship started taking the shape of the affair and the survivor found herself with him. The man promised him love and marriage even though he had a wife already. There was no trace of this knowledge to the victim and the way he had manipulated and narrated the stories to her, there way no way she couldn’t believe them.

After the promises of marriage, the accused took the girl to his house and exploited her. All the truth of his marriage were still under wraps.

He also took the girl to several other nearby locations including a resort off the Koradi road and exploited her several times.

Everything went the same for a time being before a few days back when the survivor was browsing through the accused’s mobile phone and found the truth of his marriage. The fact shook her hard and resulted in a major argument.

She decided to file a complaint against him and went straight to the Police station where the complaint was registered.

“As the girl was minor, we had to take immediate action to nab the accused,” said PI, Nandavan Police. 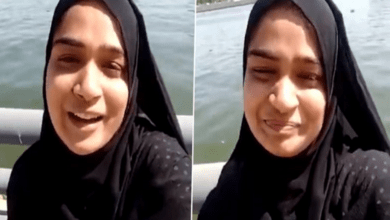 Woman jumps into Sabarmati river and leaves a heartbreaking video