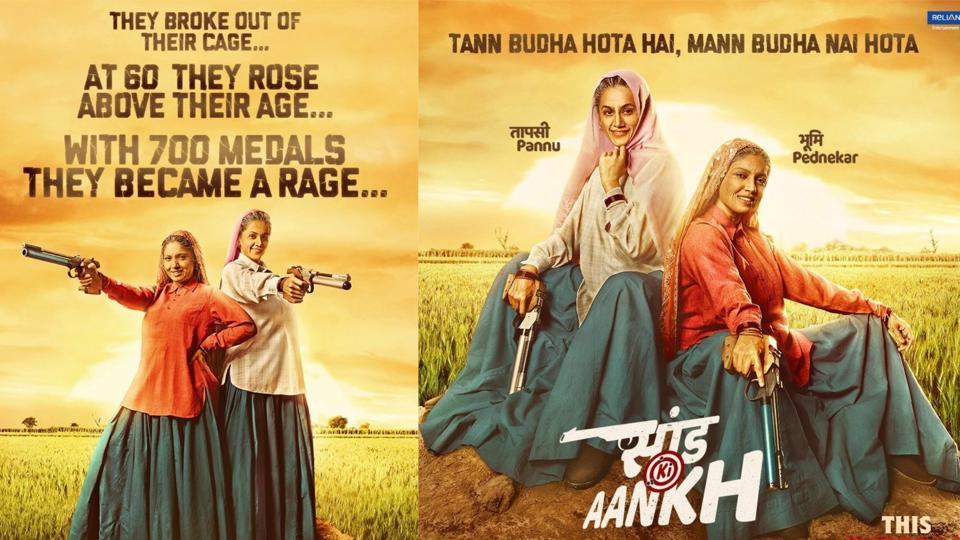 Saand Ki Aankh trailer has been unveiled and audiences can’t keep calm. Being helmed by Tushar Hiranandani, the film promises to deliver an unanticipated level of fun and entertainment in Bollywood. The film has been produced by Anurag Kashyap and is set to release this Diwali.
The trailer of Taapsee Pannu and Bhumi Pednekar starrer Saand Ki Aankh is finally out releasing the non-stoppable fun with the two oldies you have definitely never seen before.

If you go by the looks of the movie poster, you might have surely understood what a roller coaster ride it is going to set you in delivering an interesting take on the life of the elderly sharpshooters named- Chandro and Prakashi Tomar.

The trailer however, shows how the Tomar women are taking up shooting and fighting for their rights after facing years of oppression. While both Taapsee and Bhumi have proved to be quite capable actors, it is simply difficult not to notice the elderly make-up aspect; they are carrying all over the film. Instead of appearing as the natural elderly women, supposed to playing their part as sharp shooters, they are simply appearing as women loaded with tons of make-up to make them look old.

Putting this aspect aside, the trailer also offers a few moments of laughter and intriguing intent. The film is expected to relate two women who are on their way to create history but, what is to be noticed with the release is if their back-story would make this film watchable or not.

The official crux of the film however, states that, “Before 1998, Johri village in the interiors of Uttar Pradesh was just like any other village in India. But during this time something extraordinary started, which took this village to national and international levels of success and fame. As a result of which this village had become an inspiring example for the entire nation. At the age of 50 they picked up a gun for the sake of their daughters in the hopes of encouraging them towards a bright future. They did not want their daughters to share the same fate of a lifetime of suppression. What unfolded was nothing short of miraculous. They discovered their own skill of being exceptional shooters. Despite all the odds, they won 352 medals each in the course of their veteran professional life as a shooter.”

Are you ready to watch the fun coming soon this Diwali?