In the coming days, the test run was also a pre-cursor for the launch of commercial services at Sitabuldi’s Interchange-Prajapati Nagar Metro Station. Brijesh Dixit is the Managing Director of Maha metro. He has said that about 99% of the project at reach has been completed and the rest will be completed in the next 10 days.

According to a press release, the metro runs parallel to the alignment’s Central Avenue.

Commissioner of Metro Rail Safety Will Do Mandatory Inspection

There are total 9 stations in the entire section of Reach IV except at Sitabuldi Interchange – Telephone Exchange Square, Ambedkar Square, Cotton Market, Nagpur railway station, Chitar Oli, Prajapati Nagar Metro Stations, Dosar Vaishya Square, Agrasen Square, and Vaishno Devi Square. This section would have served as a point of contact between the eastern and western parts of Nagpur.

Talking to media persons, Brijesh has said that after the completion of work on Reach-IV, the Metro Rail Safety Commissioner (CMRS) will also conduct a mandatory inspection, Due to which the way will also be paved for starting passenger services on that route. Speaking about the ongoing project work in Reach-II, which extends from the Interchange of Sitabuldi to the station of Automotive Square Metro. He has said that in this section, the first of its kind in the whole of India, the 4 layer transport system is also included. The Gaddigodam bridge weighs about 1,680 tonnes and was also built at Butibori Industrial Estate. It will take about 20 more days for the bridge to be built. 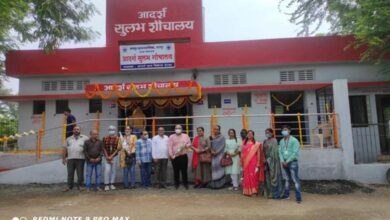