Nagpur: A 44-year-old liquor smuggler in Madhya Pradesh has been murdered by her so-called ‘fifth’ husband, who was also her son-in-law. Apart from this woman, the sordid tale of sex, love, and betrayal killed her 9-year-old daughter in the month of September. 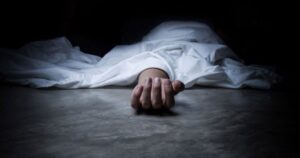 Rampyari Sahu and his daughter Rani were attacked with concrete before being strangled later by Rajesh Sahu. And after a very long chase all over India, this accused was arrested. Which ended completely on the date of 19 November in Besa, on the outskirts of the city. Rajesh Sahu, who is married to Rampyari Sahu’s daughter with 2 children, managed to hold the police well for about 2 months with the help of his skills. In which he had fully confessed to watching crime serials.

The Kalmeshwar police team of Asst PI Pravin Munde and PI Asifraja Shaikh under the supervision of SP Rural Vijay Kumar Magar with the help of several citizens and Beltarodi Police was completely successful in zeroing in on Rajesh Sahu. Because he was going to a cyber cafe to get his email id revived.

Along with this, the bank officials helped the police to trace Rajesh Sahu’s location. Who was not using the mobile phone at all. And Rajesh Sahu used his own Paytm and Aadhar card to operate his own bank account, due to which the bank officials were well helped to understand his own location. And Rajesh always used the mobile phones of passers-by to make calls and used to hide from place to place.

Police have said that Rampyari and Rajesh were living at a construction site in Besa as ‘wife-husband’, projecting Rani as their ‘daughter’. And he had planned to look for a job as a farm laborer in a very secluded place so that the dead bodies could not be easily identified at all.

It is also learned that Rajesh had gone to Sitabuldi after committing murder and then took a bus to reach Chandrapur city wearing brand new clothes. And then later he caught a train to reach Howrah in Kolkata but his phone and belongings were stolen. Then he also lodged a complaint regarding this. And as proof of his own condition, he had traveled in the train showing the FIR.

Rajesh Sahu had told the name of his and his own village to the owner of the same farm who had hired him for work. And then the owner had clicked his picture carelessly, due to which later the police got a lot of help in tracking him.