Nagpur: The Fire and Emergency Services Department of NMC (Nagpur Municipal Corporation) is not only grappling with the shortage of manpower, Rather, 9 fire brigade vehicles are also forced to be deployed, Which has already been completed about 15 years of this life span. 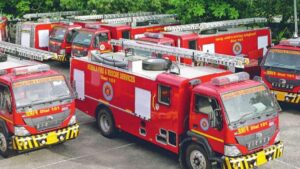 Right now his department has sought permission from the Standing Committee to scrap these vehicles. In which 6 fire tenders, 2 water tankers, and 1 foam tender are also included. It has also urged the panel to make a provision of about Rs 2.99 crore for the purchase of 3 fire tenders with a capacity of about 5,000 liters of water.

Presently the department has a fleet of about 66 vehicles. There are Water Tanker 2, 15 fire tenders, Water Browser 2, and Water Mist Vehicle 2, a quick response vehicle, and four fire fighting bikes.

Out of about 27 tankers and fire tenders, while seven fire tenders, two are 30 years old, including one foam tender, have completed 18 and 16 years respectively.

Under the scrappage policy of the Motor Vehicle Act of the Central also, vehicles that have completed about 15 years should be canceled.

According to sources, the administration of the city has also approved the cancellation of these vehicles completely. After which the department has also submitted the proposal to the Standing Committee. On the date of 28 December whose meeting is to be held.

A senior official of the department has told that since the municipal body is facing a financial crisis. Because of this, it is absolutely not in a position to replace all the 9 fire fighting vehicles at once. Because of this, it will replace the vehicles in a phased manner. He has also said that in the first phase, he has decided to replace 3 fire engines and the remaining six in the next 2 phases.

Metro Area Development Authority of Nagpur, which is a planning authority for areas up to about 10 km from the municipal limits, Has also proposed a fire station at Jamth. As it is yet to come, the fire department of Nagpur Municipal Corporation is providing emergency services there as well, Also participating in emergency calls throughout this district, official said.

Also Read: Material and Manpower paucity remains a major issue for both GMCs