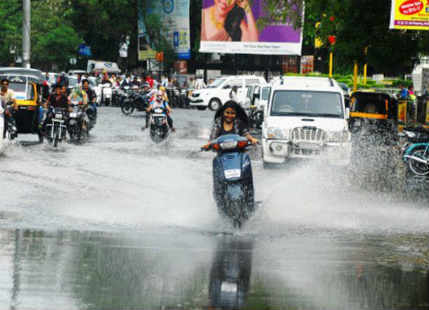 It rained cats and dogs in the afternoon in Nagpur when the city was busy preparing for Diwali the other day. This did hamper the buzz and fizzing out the spirits to some extent but as soon as the rain vanished, it brought back the lost zeal to a great extent. However, the heavy rains caused water logging at many of the places leading dismay among the people of the city. Yet they recovered from it to get back to their celebration mood.

The Indian Meteorological Department has earlier given the forecast of getting rains in the city on the Diwali eve, all thanks to the cyclonic environment created at the Arabian called Kyarr that wreaked havoc not just in the city but the other places as well. The rain was caused due to the moisture found in the atmosphere. There are chances of rains on Sunday as well, but as we see the bright sunny day, the probability now seems low. Well, let’s see how things move now.

Many of the areas in the city witnessed the power cuts that were witnessed over the areas of GMC Hanuman Nagar seen over the localities due to the heavy rains. However, amidst all this, we need to understand the fact that the weather around the city has remained pleasant that somewhere helped the citizens to cheer and have a great time. Well, you stay tuned to us and share what you feel the most about it by commenting below. Let’s see how thing moves now.