Nagpur: Maoists suddenly attacked the villagers in the Kamlapur range who were strongly opposing the action of the Forest Department. An official team of the department also allegedly set ablaze around four bikes between Cafewancha and Nainer in Aheri taluka of South Gadchiroli on Thursday.

People who have been assaulted, they have been identified as range forest officer (RFO) VS Bhoyar, round officer SM Yedlawar, forester Raju Medalwar, forest guards Pramod Tadose, Hemant Bobate, Radha Madavi, and surveyor Ganesh Repalwar. Sources have also said that the Maoists have not confronted Madavi at all. Their mobile phones were also snatched away.

Near Karaspalli village too, before giving approval for the construction of a road, the officials conducted a spot survey and also checked the alleged felling of trees.

Banned outfit of the Communist Party of India (Maoist)

The proposed road was also approved under the Pradhan Mantri Sadak Yojana, But due to a delay in construction, trees had grown on the patch. Sources have also said that the villagers had cut around 400 trees due to a delay in granting permission by the forest department under the Forest Conservation Act.

The department had booked 86 persons from Alapalli, a road contractor, some small contractors, and a sizeable number of the local population. The report was also handed over to the police for criminal action.

Sources have also said that the Aheri Local Organizational Squad (LOS), a banned outfit of the Communist Party of India (Maoist), was the most likely behind the attack on the forest officials and the arson. SP Nilotpal has also said that the police are probing the incident. 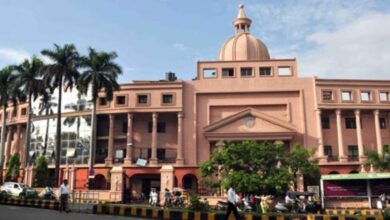