Nagpur: The spinal cord is a very complex structure that helps in posture, movement and very well protects the nerves. And we all know that there is a disc in this spinal cord and we all are also familiar with the problems of this slip disc. But very few people know that this spinal column has real joints just like knees or elbows. Which are known as facial joints. Like knees and elbows, cysts develop in these joints as well. Which is a rare situation. To detect as well as to treat it. 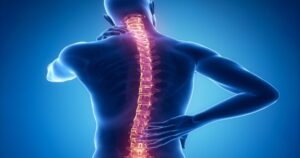 A case of this facial cyst was recently detected and treated surgically at Wockhardt Hospital.

The spine surgeon who performed this procedure is Dr. Priyesh Dhoke. They have said that the patient, who is 72 years old, had developed acute symptoms such as severe pain in standing and walking.

Dr. Priyesh has also said that people around him suggested that this could be due to advanced age. 1 Retired Professor with an active lifestyle, it was a shock for this gentleman to completely stop his daily activities.

The most interesting thing is that even after having MRI, these doctors did not detect this cyst at all. Dr. Priyesh has stated that there was no mention of facet joint cyst of any kind in the MRI report in this incident. And the radiologists had reported the degenerative condition of this spine. And as the doctor performed the 1st treatment, Dr. Priyesh examined the MRI films in great detail and found that it was a facial cyst.

Only after a fairly successful surgery was 1 giant cyst completely removed and sent for histopathology biopsy to confirm this. And only after that, all the pressure on the spinal nerves was removed. The patient has reported that he started walking completely the very next day. He has said that he was able to walk confidently for long distances without any pain over the next 2 weeks. It’s like a whole new life for me. And he had been bed-bound several days earlier and felt utterly helpless. His life has completely changed.

It was only after several consultations that all her symptoms were attributed solely to her age. A senior surgeon at the Government Medical College and Hospital had confirmed that facial cyst 1 is a very rare condition. Where a synovial swelling develops in the face joint. And then it compresses the spinal nerves. Due to which there is pain, numbness, or weakness in the legs. He has also said that sometimes it is also associated with paralysis in the legs and difficulty in urinating and passing stools. This surgery is an effective solution to this condition.

Mass Quitting Post Pandemic. How to Deal With It?