Chandrapur: On Thursday evening, On Chintal Dhaba-Ashta road, a tigress trapped in a culvert in the Pombhurna range has been rescued. This was a matter of good fortune for the forest department, as that tigress was responsible for many human killings in the area. This tigress was seen roaming in the fields around Chek Ashta in the village since early morning. It is also learned that this animal had also killed a goat in the field, And then after this, the farmers of the area had also tried to scare him by making a lot of noise. While trying to cross the road at Chintal Dhaba-Ashta, the cat broke with the help of a narrow pipe culvert. As soon as the pipe was shrinking, the tigress was trapped in it.

Then hearing its roar, the farmers very soon realized that it was trapped. And in an eyewitness video, it is shown that this animal has a very serious injury on its face. The rescue team of the Forest Department reached the spot at that place and then put a cage on one end of the pipe. Then the rescue workers working from behind also forced this tigress to crawl forward from the cage.

Arvind Munde, Central Chanda Forest Division, DCF, has also confirmed that it is the tigress responsible for the attacks on humans. This tigress had killed about 3 people in the villages of Pombhurna tehsil and injured 5 others. MLA Sudhir Mungantiwar, Former Forest Minister, and other BJP leaders were also pressurizing for many days to catch the problem of this tigress.

Regarding the injury to his face, Munde vehemently denied an accident with a vehicle. Sources have also said that it is likely to be from crude bombs, Which is often used to scare away wild boars that infiltrate rural areas. The enraged villagers may have put a bomb to kill the tiger, due to which it may explode if chewed.

After being rescued, this injured tigress was taken to the Transit Treatment Center for Wild Animals in Chandrapur. 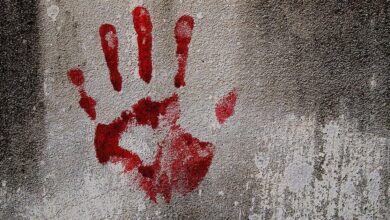