French teacher (Samuel Patty,47) who had recently shown students cartoons of the Prophet Mohammed as part of a class discussion on freedom of expression, was beheaded outside his school on Friday. President Emmanuel Macron addressed to it as an “Islamist terrorist attack”. According to the French counterterrorism prosecutor, Jean-Francois Ricard the 18-year-old who beheaded a history teacher in front of his school spoke to his students in the street and asked them to identify his victim. The assailant, whose identity has not been established, was shot by police as they tried to arrest him and later died of his injuries, police said. 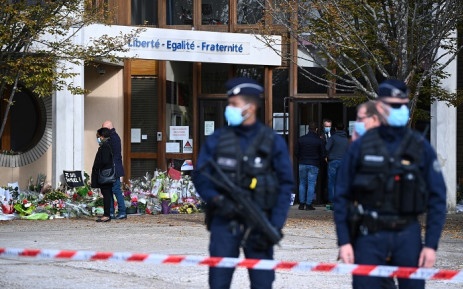 Rickard said that a picture of the teacher’s body was found, which the attacker posted on “Twitter”, accompanied by a message admitting to his death, on a phone next to his body, after police killed him. He added that the account belonged to the attacker. Twitter quickly removed the post and said it closed the account for violating company policy. The attack took place at around 1500GMT, in Conflans Saint-Honorine, a northwestern suburb around 30 kilometers from the center of the French capital. After years of teaching experience in the state, Patty respectfully asked the Muslim pupils to leave the room while he was teaching the subject. He had no intention of harming the religious sentiments of any student. This gesture, however, might have stricken a controversy in the minds of some. Four school pupils who may have helped identify the murdered teacher to his killer in exchange for payment have been detained. This brings to a total of 15 the number of people taken into custody in the aftermath of the murder.

The killer’s grandfather, parents and 17-year-old brother were detained shortly after the attack.
The father of a pupil who reportedly launched an online campaign against Samuel and a preacher described by French media as a radical Islamist were among six people arrested on Saturday. Interior Minister Gérald Darmanin accused the two men of having issued a “fatwa” against the teacher.
This news comes just days after a follower of the Islamic State militant group who attacked a police officer with a hammer outside the Notre-Dame cathedral in Paris was sentenced to 28 years in jail.