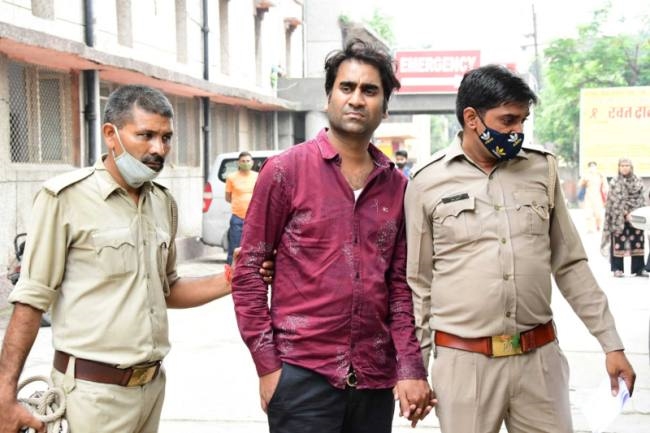 Ghaziabad: The news has come out that the biggest accused in the Freedom 251 phone scam and Rs 200 crore dry fruit scam named Mohit Goyal has been arrested by the police in Greater Noida on Monday and police said That the arrest has been made in a different case.

And tell you people that on August 19, Vikas Mittal, a resident of Indirapuram, had filed a complaint against Goyal and five other people alleging fraud of Rs 41 lakh. The police raided Goyal’s Greater Noida house on Monday and he was arrested by the police.

He had cheated Vikas Mittal of Rs 41 lakh. And when the victim spoke to him, he was intimidated and horrified. On August 19, the accused tried to kill Mittal with a car. And meanwhile Mittal was injured and on the same day Vikas Mittal lodged a complaint against Goyal.

and thereafter, sections 420 (cheating) of the IPC, and sections 384 (extortion), 386 (extortion of money by putting any person in fear of death), section 323 (causing hurt to any person), section 504 (violation of intimidation) An FIR was registered under intentional insult. Section 506 (intimidation), 307 (attempt to kill) and 120B (criminal conspiracy).

After the FIR was lodged on Goyal, Police raided on Goyal house by a team of Ghaziabad police and police  arrested him. And five others have been named in the complaint along with him,” Pandey said.
In 2017, Goyal had earlier tried to sell the “Freedom 251” smartphone for Rs 251. Goyal called it the cheapest smartphone in the market. Later that year, Goyal was picked up for his involvement in the scam. Goyal was also arrested in 2018 in an extortion case.

Let us tell you that Goyal also runs a company named Dubai Dry Fruits and Spices Hub from an office complex in Sector 62 of Noida. And the police have also reported that the police have received at least 40 written complaints of fraud against Goyal’s company from traders from Punjab, Haryana, West Bengal, Uttar Pradesh, Rajasthan and several other states and police also told that there are up to 35 cases of fraud and other offenses registered against Goyal across the country.