Nagpur: Roads are in bad shape in some parts of the city. The State Public Works Department (PWD) has done concrete/asphalt and widening of several inter-district roads in Gondia, Bhandara and Nagpur districts. At a cost of about Rs 1,103 crore in the last two years. Two major roads of these cities are also a part of the Public Works Department project. 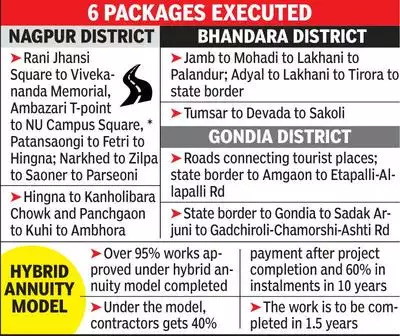 The Superintending Engineer of the Public Works Department named Vidyadhar Sardeshmukh As per the data available from his office. More than 95% of the 6 packages sanctioned under the Hybrid Annuity Model (HAM) have been completed in these 3 districts. Minor works include marking, road dividers, and footpaths, etc. This too is likely to be completed very soon.

Condition of both these roads was bad

Public Works Department came to the fore in the year 2019 with the Hybrid Annuity Model to combine a very large number of tasks. It used to work only on limited roads every year due to its low budget.

Hybrid Annuity Model under, private contractors get paid 40% after the completion of the project. And balance up to 60% in equal installments over 10 years. And this work has to be completed in about one and a half years.

These contractors will have to repair all these roads for about 10 years. The Public Works Department will also pay around Rs 20.71 crore for the operation and maintenance of these 6 packages.

The North Ambazari road from the road from Ambazari T-point to Nagpur University Campus Square. And Rani Jhansi Square to Vivekananda Memorial has been widened and concreted wherever necessary. And the condition of both these roads was bad. Especially after the work of the Metro Rail Corridor, the North Ambajari road was also badly damaged.

Minor works like road dividers etc. are still going on between Ambazari T-Point and Campus Square.

Gondia and Bhandara districts have huge religious places, water fountains, lakes, tiger reserves, etc. And the roads connecting all these places have been widened and asphaltised.