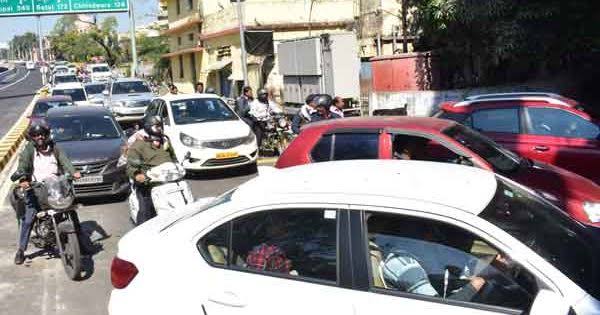 Just when the Sadar Flyover was inaugurated by the Union Minister of Transport and Infrastructure Mr. Nitin Gadkari, many thought it to be a decision on haste as it had some issues, which were not resolved. It was made to ease the traffic that goes on peak during the morning and evening hours moving from Sadar to LIC Square and other areas from there.

However, instead of becoming the source of ease, the flyover turned not more than a curse for the Nagpurians as they seemed struck at the LIC Square while getting away from it to their respective roads. This brought huge traffic chaos at the Reserve Bank Square as the traffic came in huge number thus blocking the way for others moving at the Samvidhan Chowk. This chaos was first noticed on Sunday itself when huge traffic was seen catching the event Khasdar Krida Mahotsav in Nagpur.

People from the Indoor stadium at Mankapur were returning which included the rural police after winding up their program at the venue. Since there is no traffic signal in the flyover, the traffic came in a huge number and cluttered in the area. The traffic police have only added barricades just at the end of the flyover at Reserve Bank, which has actually made things bad to worse. However, while inspecting the flyover, Gadkari has hinted this issue and he has even asked the authorities to install signal lights there. Perhaps with a better homework, issues like these can be resolved, which seemed ignored by the concerned department.