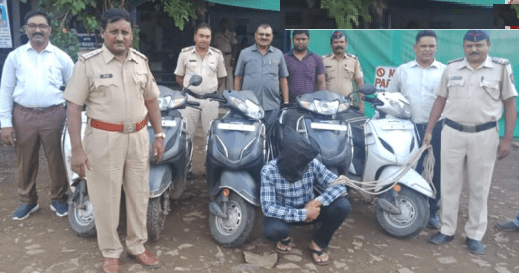 With the growing complain of vehicle lifting in areas like Mankapur and other areas close to it has hampered the area police. This made the police to act far and activate their network to nab the culprits who were involved in this notorious act. As per reports, more than five stolen two-wheelers were recovered from the culprit active in the area by the police.

As per reports, he was caught with five vehicles that he had lifted from Mankapur and other places in the city. The cops got a complaint from a local resident about his activa that got lifted by the notorious thief. The police then activated their local network to get the input to act them fast to nab the suspect called Sajid Sheikh alias Monu Sheikh who is from the slums of Tajnagar close to Wox Coolers Factory in Mankapur.

The accused is a mechanic and when the police caught him, he tried to mislead them but the cops were quick to understand and forced him to utter the truth. The police then recovered the vehicle worth 1.47 lakhs. Senior PI officer Wazir Sheikh and his team were quick to nab him. He is booked under the relevant sections of the IPC and would be produced before the courts once the police jot down the charge sheet. Stay tuned to know more about this and others only with us. You can comment on it only when you have anything to share about the story by commenting below or others.